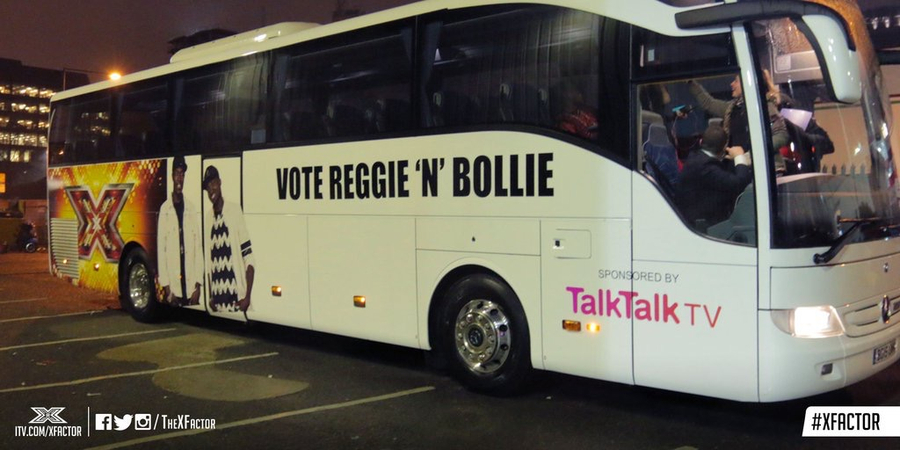 Wrapping for the Stars

During Sunday’s X-Factor grand finale the three finalists had the privilege of arriving on their own personalised tour bus thanks to Esign of Colchester. Having personalised the buses from the previous year they were given the opportunity of carrying out the same responsibilities for a second year running.

The team travelled to London for the show’s semi-finals to continue with the graphic application, as they had already applied the generic graphics a week prior to this. Working under immense pressure to ensure that the graphic application went without problems, they also had the added pressure of working to the tight deadline of a commercial break and a sing-off competition.

With opportunities like this not coming around too often, Esign certainly made the most of it as it offered a great chance for them to demonstrate their skills, whilst allowing them to have exposure on national television.

Zak Pickering, Managing Director stated "This was the second year that we've provided all the graphics for  X Factor. We get involved early on in the process as we wrap the vans used on the audition stages. We also provide various graphics throughout the series.

We work a lot with various high profile clients, but to actually get television exposure this year was a new experience for most of the team. Last year we were out of shot whereas this year they really wanted to make a point of featuring us applying the graphics, which has resulted in some great exposure for us."

Regularly using 3M materials, the team from Esign had no problem when applying IJ140 Series and 50 Series to the buses. With great trust in the products it certainly helped take some of the pressure of their shoulders.

Both 3M IJ140 Series and 50 Series are available from William Smith with same day despatch on orders received before 6:00pm.