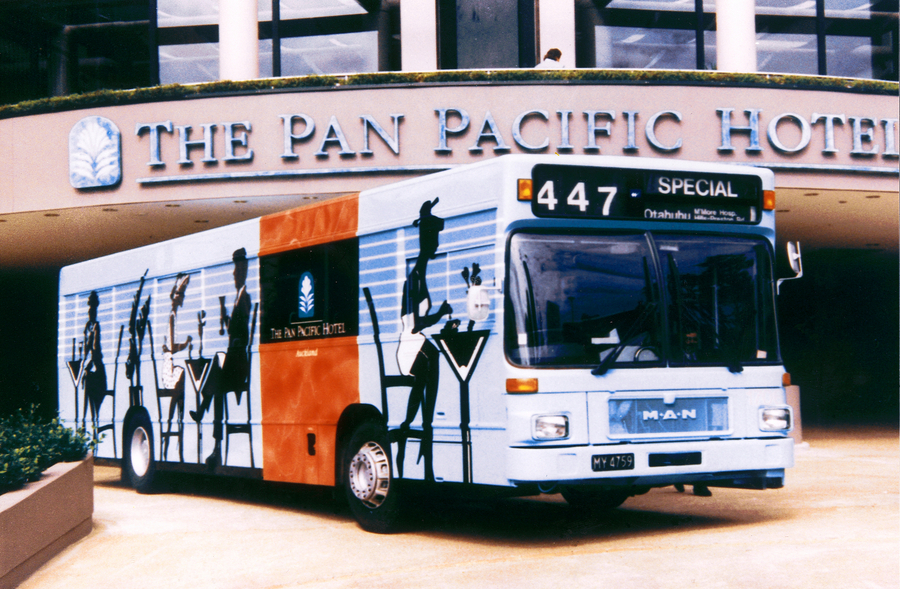 25 years ago, the world’s first bus wrap was seen on the streets of New Zealand.

The unique characteristics of Contra Vision® see-through products made it possible to wrap an entire bus in promotional graphics, extending the imagery over the windows for the first time while still allowing passengers to see-through from the inside.

The impact of such large, moving advertisements in often highly pedestrian areas, caught the imagination of advertisers and designers alike, and iconic designs followed. Even today, bus wraps are as popular as ever.

It may be their reassuring visibility in an age of digital communication or perhaps there is a deeper psychological element at work.

Cognitive psychology suggests that when images move, they capture our attention, people instinctively recognise movement as something we need to pay attention to, and so the brain is caught.

It 's no coincidence that there is an increasing number of moving advertisements across the urban environment, with digital screens by roadsides, in shopping centres, on buses and other vehicles and within transport hubs, arguably the first bus wrap paving the way.

Like many inventions, the test phase was on a much smaller scale as the technology needed to prove its worth. The first ever use of one-way, see-through advertising appeared as a poster on bus windows for Beeline Buses in Manchester, in 1989.

The posters were for Imperial Tobacco and printed on a “new” patented material called Contra Vision®. Contra Vision Ltd (UK), was the company created by Roland Hill, the inventor of Contra Vision® see-through graphics to develop this innovative technology.

Two years later in 1991, the first "full wrap", bus with advertising carrying over the windows and bodywork appeared in New Zealand for the Pan Pacific Hotel. That was just the beginning, the eye-catching format soon becoming hugely popular in Australia, followed by South Africa, and the UK.

The USA entered this market in 1992 when Visual Technologies, Inc., a licensee of Contra Vision North America, Inc., provided Contra Vision® for the first "full wrap" bus in the USA, for the US Postal Service in Denver, Colorado.

The first digitally printed bus wraps in the world used Contra Vision®, imaged by the 3M™ Scotchprint™ process, which advertised the launch of Crystal Pepsi in March 1993.

How Can Contra Vision Perforated Window Film Material Be Used

Through a process of continuous innovation, Contra Vision established the widest range of one-way vision films, available not only for bus wraps but increasingly for a variety of applications on static and transit platforms.

The Contra Vision® Performance™ range of perforated window film is the fastest growth product in this field, offering not just a range of transparencies but application, print and visibility options too.

Contra Vision® Performance™ perforated window film transforms any area of glass into a billboard, the ease and speed of application and removal makes it the perfect medium for either long or short term promotions.

Making use of existing glazing in the infrastructure of our towns and cities has generated new advertising revenue streams for Out of Home space advertisers. In addition, utilising glass in their own buildings has also provided brand managers and planners with innovative and cost effective ways to support promotional campaigns.

This has led to Contra Vision® material wrapping buildings, vehicles and iconic structures worldwide. We also know the material stands up well to tough climatic conditions.

In Australia, for example, temperatures can vary wildly from boiling hot in the day to almost freezing at night: Contra Vision® material remains pristine whatever the weather.

As advertisers and OOH agencies continue to transform the urban environment around us, with innovations in technology and insight, it is reassuring to know that a single ground-breaking product with a dot pattern, invented in Manchester, not only transformed advertising worldwide but continues to find interesting new applications today.