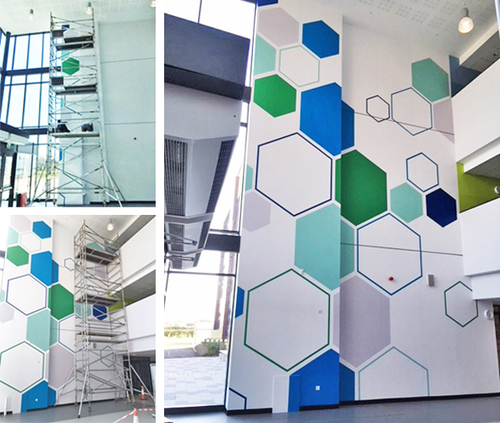 VION VP5900 HT was the product of choice for Advanced Signs Ltd. to complete a high-level graphic installation in a school atrium this summer.

Kelso High School approached the Galasheils based company to bring a student project to life in their vast, 11-metre-high entrance atrium.

They were asked to produce an 11.2m x 8.5m design based on an art project the students had created around bees, using a pallet of calming colours chosen to work with existing graphics around the rest of the school. Following a brief period of collaboration, a final honeycomb design was decided upon.

Next, Advanced Signs Ltd. had to choose an appropriate film for the application.

“On testing the wall with samples of various vinyls, we found that the VION VP5900 HT had the best amount of tack for the painted plasterboard walls,” said Allen Patterson, Account Manager.

This high tack film, from the VION VP5000 Series of polymeric digital print films, is specifically designed for low surface energy applications, such as emulsion painted walls. An aggressive adhesive gives the extra grab required for those ‘hard to stick’ to surfaces.

With a 5-year printed (7 year unprinted) durability the films are ideal for intermediate applications to flat or slightly curved surfaces.

Allen continued, “Like most high tack vinyls, preparation on lining up the printed panels is key, as you only get one chance to apply the film.” However once this was achieved, “fitting of the vinyl was fairly easy on 85% of the job.”

The biggest challenge came from fitting the graphic on the hottest weekend of the year under a huge glass wall!

“On the hotter areas of the wall, the vinyl became more susceptible to stretch due to the temperatures we were working in, but the VION material performed well.”

The graphic was fitted in full height drops to reduce overlaps and increase the quality of the overall appearance.

“The final result of the job was exactly how we had hoped it would be. The difference between the painted wall and printed area that had white vinyl was minimal. Unless you knew what was printed vinyl and what was painted, you simply would not have noticed!”

Allen added “I would have no hesitation in recommending William Smith, we receive great support form the whole team and the knowledge that they provide is second to none.”