Fitting tribute made with new signage at a Yorkshire park

LW Graphics, a one-stop shop for all things branding and promotion, helped create a fitting tribute to a fallen soldier a reality with the installation of new signage to a business park on Otley Road, Baildon.

May 2009, Jordan ‘Sapper’ Rossi, from 38 Engineer Regiment, was taking part in an operation to clear improvised explosive devices when he was caught up in a blast. Aged 22 at the time, ‘Sapper’ Rossi unfortunately died from the incident.

To commemorate the 10-year anniversary since his passing the local council gave the go-ahead for a new sign to be installed at the park which was renamed Sapper Rossi Park in a previous tribute to the soldier.

Pendle Projects, the company responsible for the task, approached LW Graphics and tasked them with installing a sign which referenced the name of the park and the meaning behind it.

Recognised as one of Yorkshire’s most successful and well-established sign and graphics companies, the team from LW Graphics were more than happy to help and reached out to Smith Sign and Display to assist on the project.

With an already strong working relationship, LW Graphics were confident in using Smith Sign and Display.

Having pitched several ideas for the signage, the final decision was made to go with Built-Up Letters which would be mounted to a stone wall.

In order to maximise visual impact from the roadside, ensuring a sleek, smart and identifiable image, the signage was to feature 570mm high, 2mm thick Built-Up Letters, powder coated, plus a poppy motif to remember the sacrifices Jordan and all the Armed Forces make for their countries. 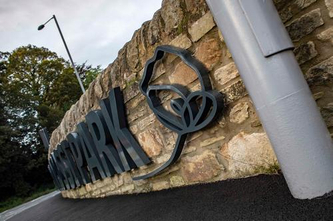 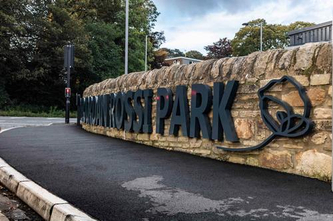 Working in cold and wet conditions, the letters were installed with ultimate precision along the curved and coarse wall and now the park has a new sign which acts as a reminder of the local soldier, who is still greatly missed by family, friends and the Baildon community.

Keeping to a strict deadline, Hazel Mead of LW Graphics said of the service received from Smith Sign and Display,

“Although it was a busy time at Smith’s, we still received our quotes and end materials in an acceptable time frame.

On phone calls their team were always polite and informative about how they could help. We were informed at each stage of the project and the materials always get delivered on time.”