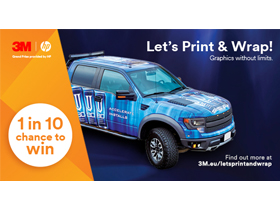 3M’s ‘Let’s Print & Wrap’ competition is offering customers a 1 in 10 chance to win thousands of prizes!

Instant win prizes include electronics and gifts ranging from TV’s to speakers and 3M products with one grand prize of an HP Latex 365 Printer worth £17,800.

Entering the competition couldn’t be easier, simply peel back the special sticker on promotional boxes of 3M Print Wrap Films to reveal a unique PIN which can be entered on the competition website, www.3M.eu/letsprintandwrap to discover if you are an instant prize winner! The more you wrap, the more you could win.

In addition to instant win prizes, each eligible PIN also gives you a chance to win the grand prize of one HP Latex 365 Printer! The winner of which will be announced at the end of the competition period in June.

People who purchase an HP Latex 365 Printer during the competition period can also register to be entered into the prize draw for the grand prize and all entries will gain a second chance to win any unclaimed instant win prizes – what’s not to love!